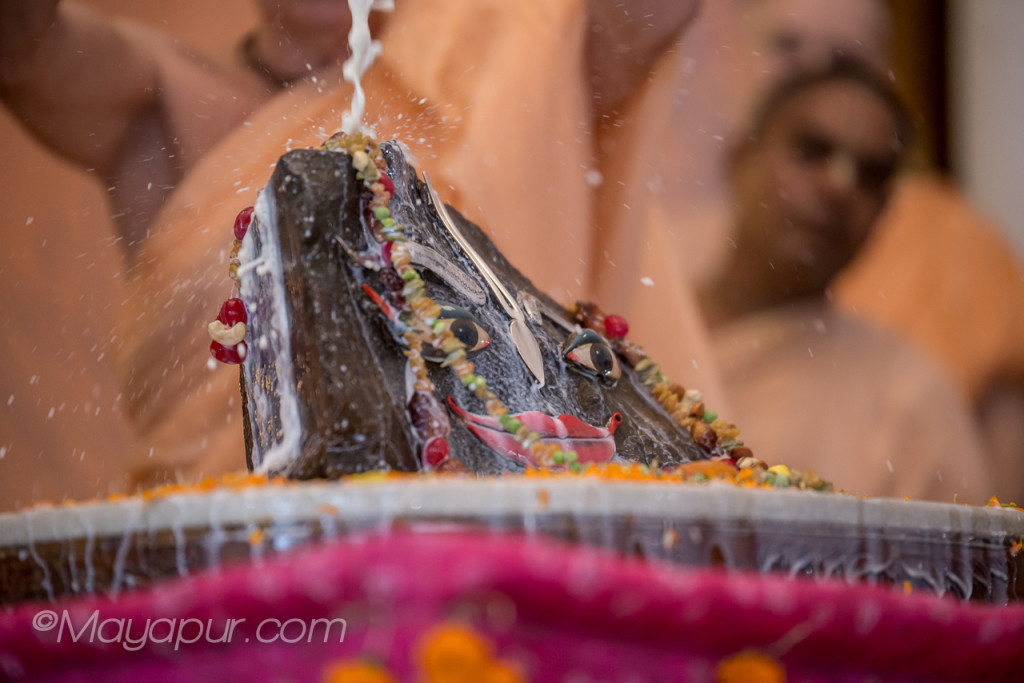 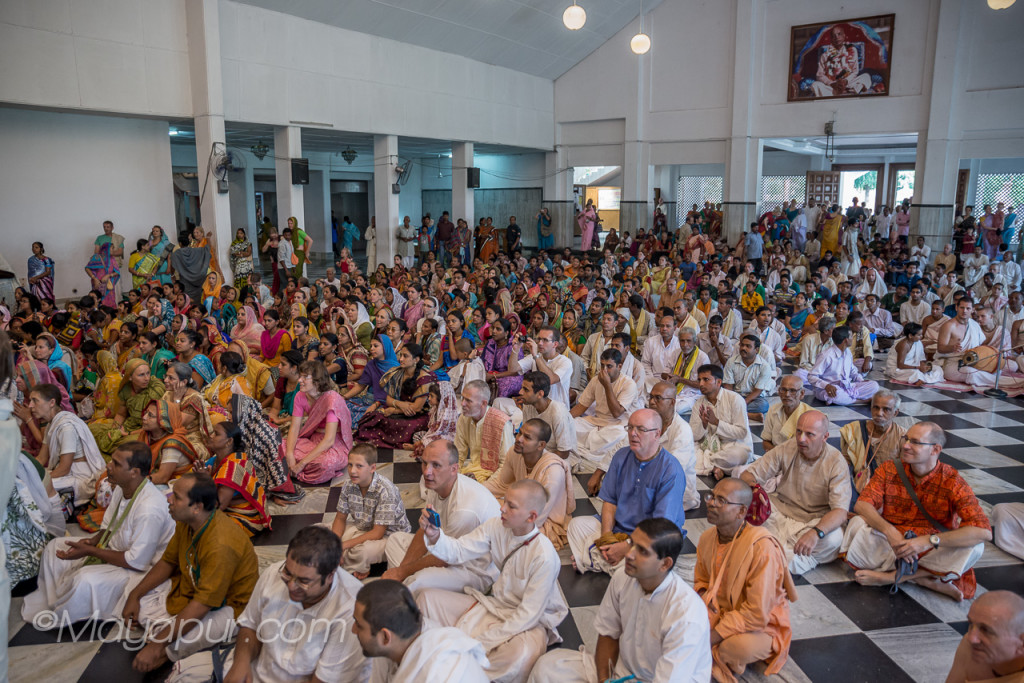 Govardhan-puja, the worship of Govardhan Hill is a tradition begun by Krsna, the Supreme Personality of Godhead. Nanda Maharaj, as the head of the cowherd community of Gokul, was making arrangements to worship Lord Indra. Although He is the Supreme Knower, Krsna enquired about the actual purpose of the performance of the yajna. Then Nanda Maharaj explained the need to worship Indra as that he provided rainfall which was the vital life-giving water-supply for the cows and the cowherd community. Krsna argued that if people act in a  pious way, they would get a result anyway, so what need is there to worship Indra. (Indra had become proud of his post, and Krsna does not like to see false pride in His devotee. False pride is like a cancerous tumour that destroys devotion. Krsna thus made an arrangement to rid Indra of this anartha.) Krsna explained to Nanda Maharaj as follows.

Of all the devotees, this Govardhana Hill is the best! O my friends, this hill supplies Krsna and Balarama, along with Their calves, cows and cowherd friends, with all kinds of necessities–water for drinking, very soft grass, caves,  fruits, flowers and vegetables. In this way the hill offers respects to  the Lord. Being touched by the lotus feet of Krsna and Balarama, Govardhana Hill appears very jubilant.  (SB 10.21.18)

Real welfare was being carried out by Govardhan Hill, since the Hill was supplying sweet waters for drinking by the cows and community, sweet grasses for the cows to eat, abundant fruits and flowers, shady caves to shelter the Vrajabasis and much more. Krsna thus convinced Nanda Maharaj to use the paraphernalia meant for worshiping Indra to worship Govardhan Hill. Being very devoted to Krsna, and trusting Him completely, Nanda Maharaj arranged for the elaborate worship of Govardhan Hill. Nanda Maharaj thus displayed the surrender and trust required to get the full mercy of the Lord. They prepared mountains of rice and subjis, lakes of kheer and sweetrice, hills of sweets, samosas and pakoras. Krsna was happy to receive the offerings of His devotees, which was prepared and offered in such a happy, festive mood. He manifest an unprecedented gigantic form of Himself, indicating that He was non-different from the Hill. Then He ate up all the offerings in a moment. He then called out: “Anniyor! Anniyor!” (Give Me more food!) The Vrajbasis had used up all their bhoga, but still they hastened to prepare whatever else they could, and placed upon the top a tulasi-leaf. Krsna again ate, and was fully satisfied. Krsna then mysteriously re-manifest all of the food offerings, which was then distributed to the happy cowherd community. Keeping their cows in the front, the Vrajbasis then performed Govardhan Parikrama, circumambulating the Hill. Their joyous procession was accompanied by bands merrily playing on their instruments, brahmanas chanting auspicious hymns whilst all the while they happily participated by dancing and singing. It was the grandest of grand festivals.

Naturally Indra, for whom all the worship was originally intended, became infuriated. “Just by the words of this talkative boy, these villagers have neglected my puja and are worshipping a mountain instead! He flew into a great rage, and sent forth rainclouds of universal destruction to destroy Braj and all its residents. The residents of Braj had nobody else to turn to other than Krsna. They trusted Him fully, so they fell prostrated at His feet seeking His protection. Then, smiling, Krsna walked up to Govardhan Hill and lifted it as easily as a child picks a mushroom. He called all the residents of Braj, along with their animals to take shelter under the “umbrella” of Govardhan. For seven consecutive days, Indra sent severe rainfall, storms and hurricanes to inundate Vrndavana. Such force is only reserved for the time of cosmic annihilation, but out of his anger and pride Indra wanted to completely destroy all Braj and its residents. Srila Prabhupada describes in Krsna Book that the rain was falling in “pillars”. Along with the soaking rain, gale-force winds made the Vrajbasis and cows quiver with cold. All the while, Krsna was holding up the Hill on the little finger of His left hand. To pacify His devotees, He placed His flute to His lips with His right hand and played the sweetest melody. All the residents of Braj kept their gaze fixed on their beloved Krsna. During the day, the cowherd boys along with their cows get to play with Krsna, and the gopis and His parents are bereft of His association. At evening time, the gopis have the association of Krsna and the gopas are robbed of His association. During this pastime, one of the most amazing facts is that devotees from ALL rasas are present SIMULTANEOUSLY. All of Krsna’s devotees had the opportunity to be with Him for seven days without interruption! They did not feel hunger, thirst or fatigue. They were satisfied and happy simply to be with their Lord. Everyone was in a joyous, festive and ecstatic mood. Govardhan Hill was also so happy to receive the loving service of His devotees. He was also showing how great a servant He is – haridas-avarya. He is such a great servant that He is prepared to use His whole body in the service of the Lord. Everyone – except for one person – Indra.

Despite his best efforts, Indra had failed to destroy the Vrajbasis. In fact, he had not succeeded in moving even a single blade of grass. Frustrated and humbled he decided to surrender to Krsna. He approached the Lord with the help of Surabhi, and prostrated himself before the Lord. Krsna didn’t even respond to Indra’s appeal. On the appeal of Surabhi however, Krsna forgave Indra. This shows the value of the Vaisnavas. We need the mercy of the Vasinavas to get the mercy of Krsna.

In Mayapur, devotees were treated to a most memorable and joyous Govardhan-puja Festival.

Breathtaking outfits altar decorations were made for the Deities’ pleasure. The altar decor displayed the scene of Radha-Madhava and the Sakhis standing in the middle of Govardhan Hill. There was wonderful Govardhan-katha given by senior devotees during the morning program. There was then a magnificent abhishek performed for our Govardhan-sila. Sweet kirtan increased the joy of the occasion, as the boys from Bhaktivedanta Academy chanted auspicious mantras. Giriraj was then moved back onto His altar after being dried and dressed. There He received His annakut – huge bhoga offering which occupied the entire mandab of Radha-Madhava. Arati was then performed, which was witnessed by several thousand devotees and pilgrims. Prasadam was then served out to the devotees at various serving points.