You are here: Home › Festivals › Nrsimha Caturdasi 2015 Celebrations
May 4, 2015
Festivals 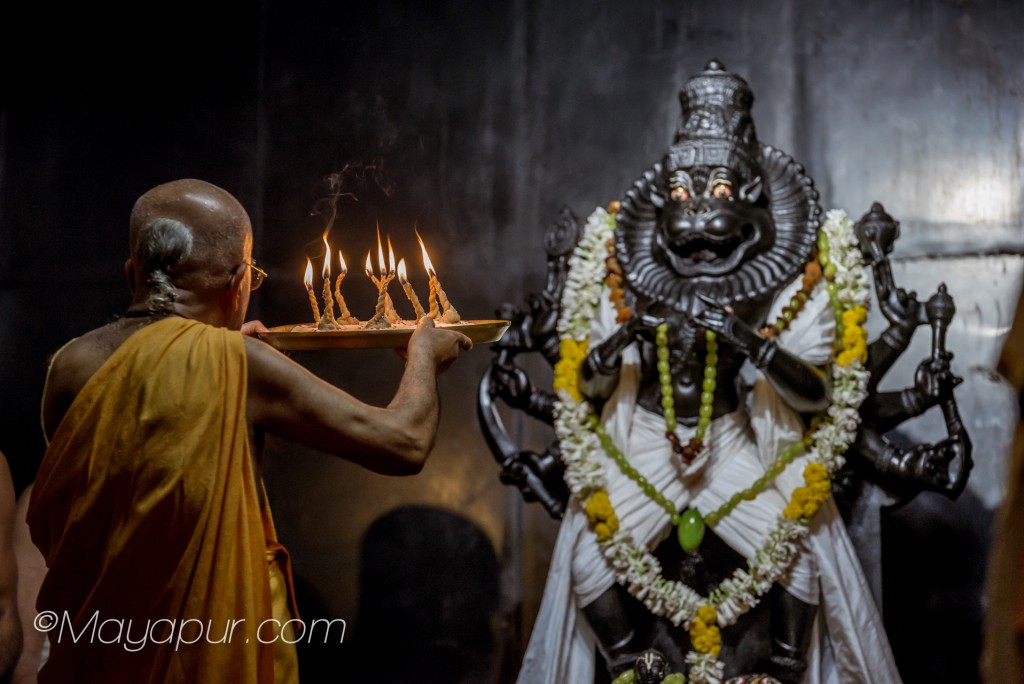 Nrsimha Caturdasi celebration in Sridham Mayapur ended last evening. The main festival was yesterday (3rd May) but the celebration started well before on 1st May. On 1st evening, devotees offered flowers to Sri Sri Laksmi Nrsimhadev deity along with chanting of 108 names of Lord. This was followed up with an adhivas. Twenty seven articles such as milk, gold, silver and copper were offered to Lord Nrsimhadev to invoke auspiciousness.

HG Pankajanghri Prabhu told devotees during Adhivas to remember Lord during these festival days and get closer to Him. There was ample opportunity to do so in form of katha, 12 Harinaam and Temple aratis. Morning lectures during festival time were filled with wonderful Nrsimha katha that came from lotus mouth of elevated speakers such as HH Bhakti Madhurya Govind Maharaj, HH Bhakti Purusottama Maharaj, HH Gopal Krsna Maharaj and HH Bhakti Viday Purna Maharaj. The temple hall was jam-packed with devotees on 2nd and 3rd especially during time of aratis and 12 hour Harinaam sankirtan.

During Abhishek, Lord Nrsimhadev was bathed with many items such as milk, flowers and ghee. There was a huge turnout of devotees and several had to view the event on large TV screens placed in Temple hall as very few can directly view Lord Nrsimhadev in Temple. There was also a celebration by community devotees in Grhastha Park. This included Harinaam sankirtan by HG Mahatma prabhu and bhoga offering to Lord Nrsimhadev. In the end, there was an ekadasi feast for all devotees.

Not to forget, there was an extremely beautiful dress and flower decoration for all the Deities on Nrsimha Caturdasi day. Visit galleries above to see very high quality images of Lord’s darsan and abhishek.