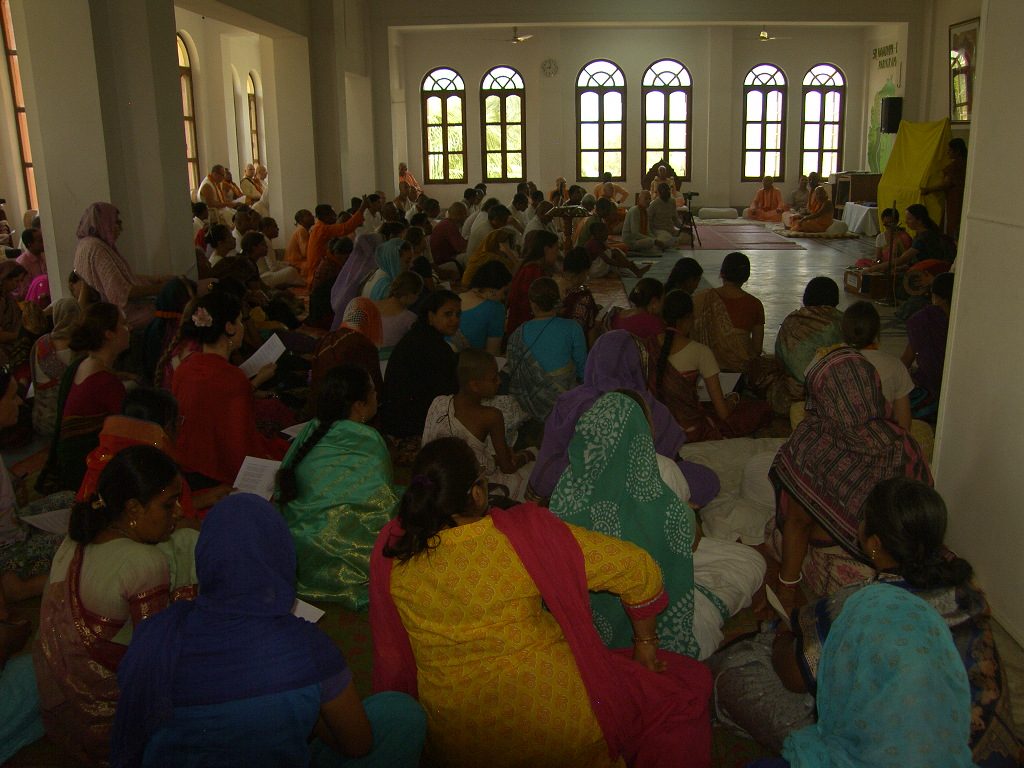 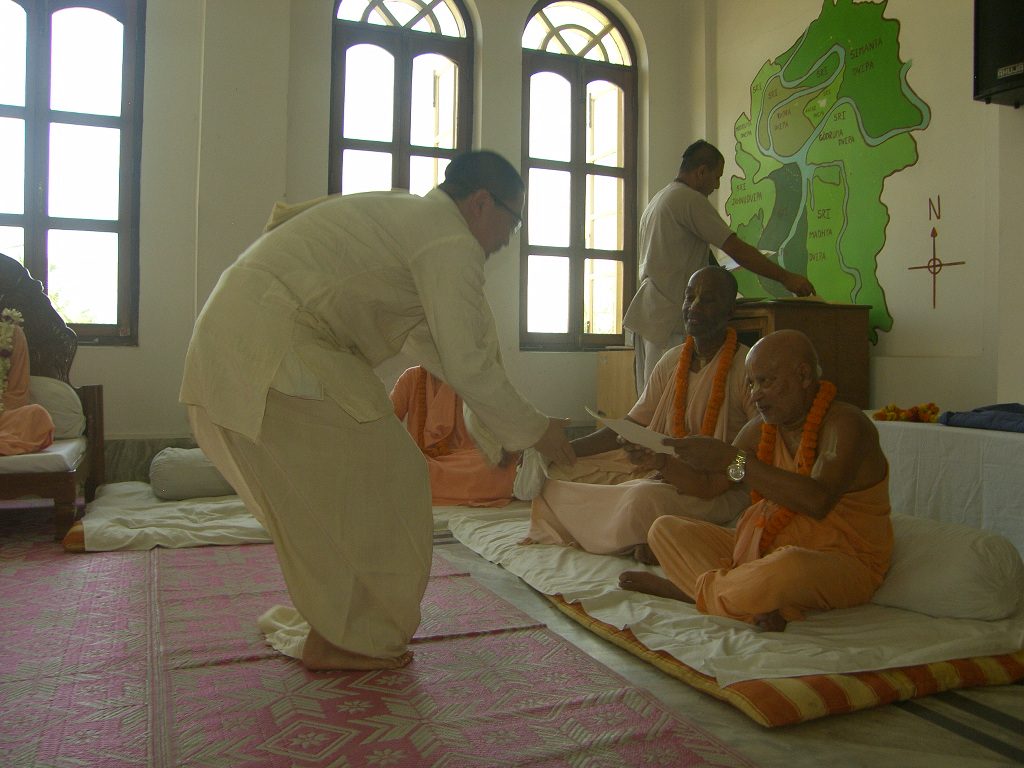 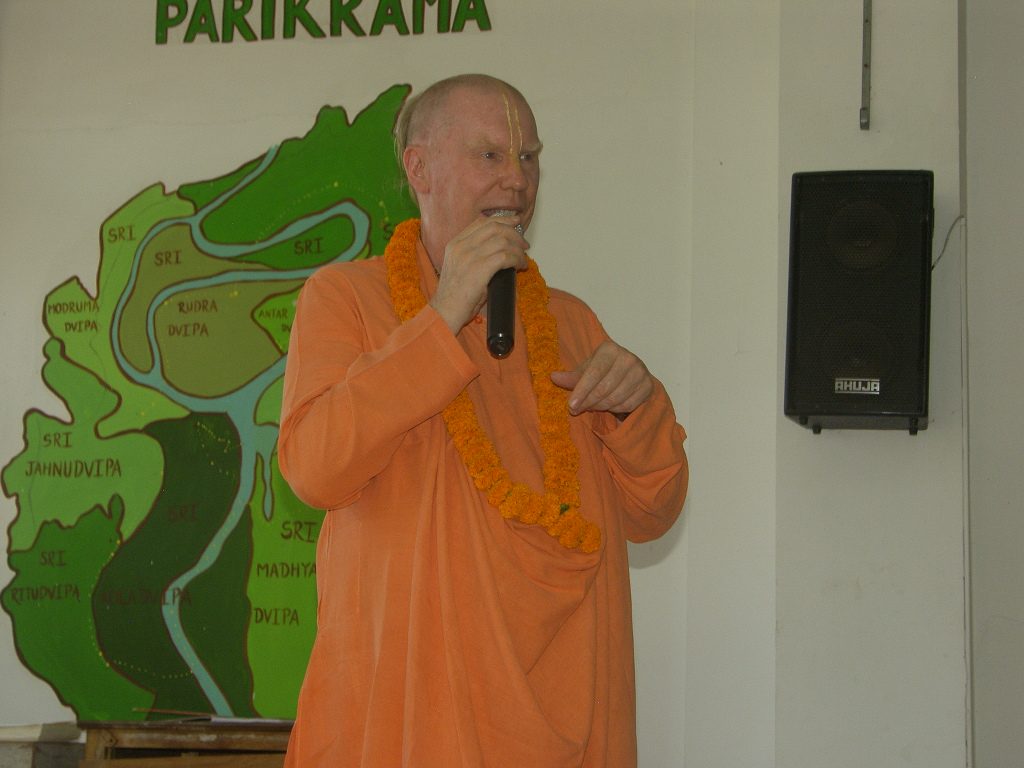 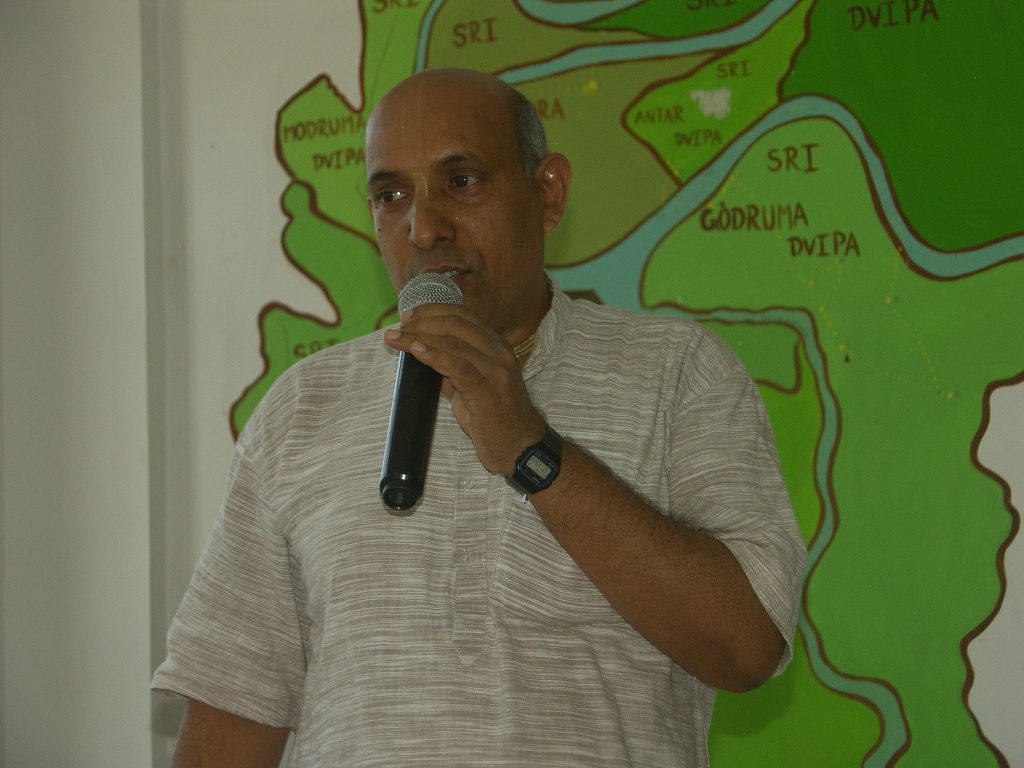 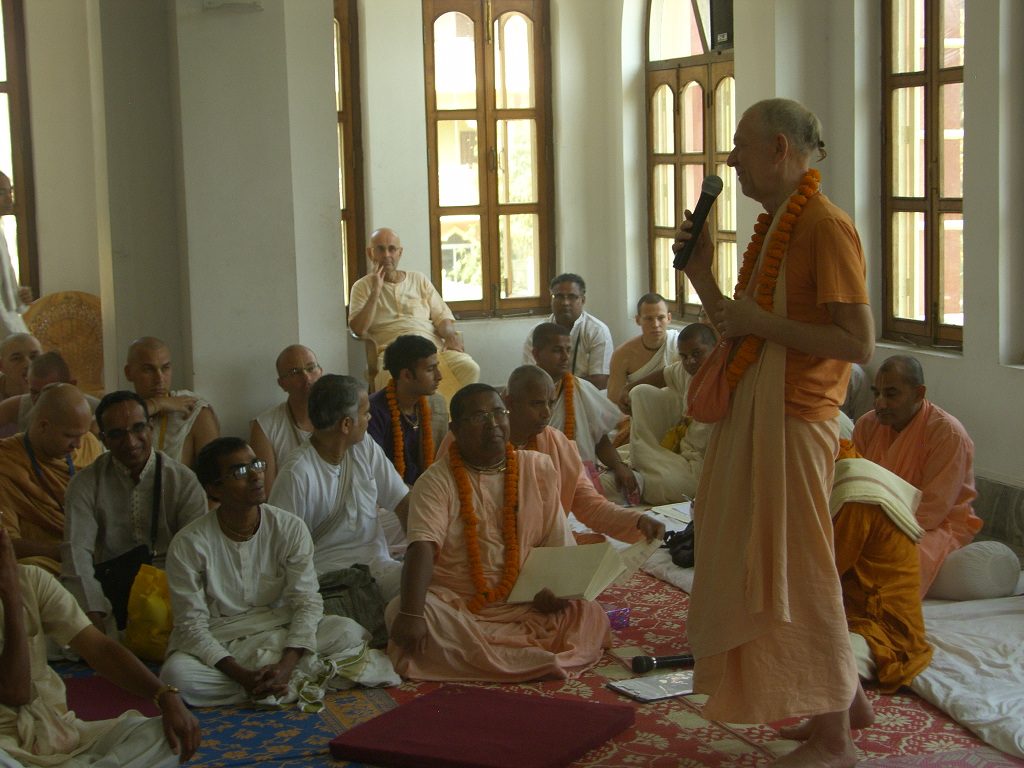 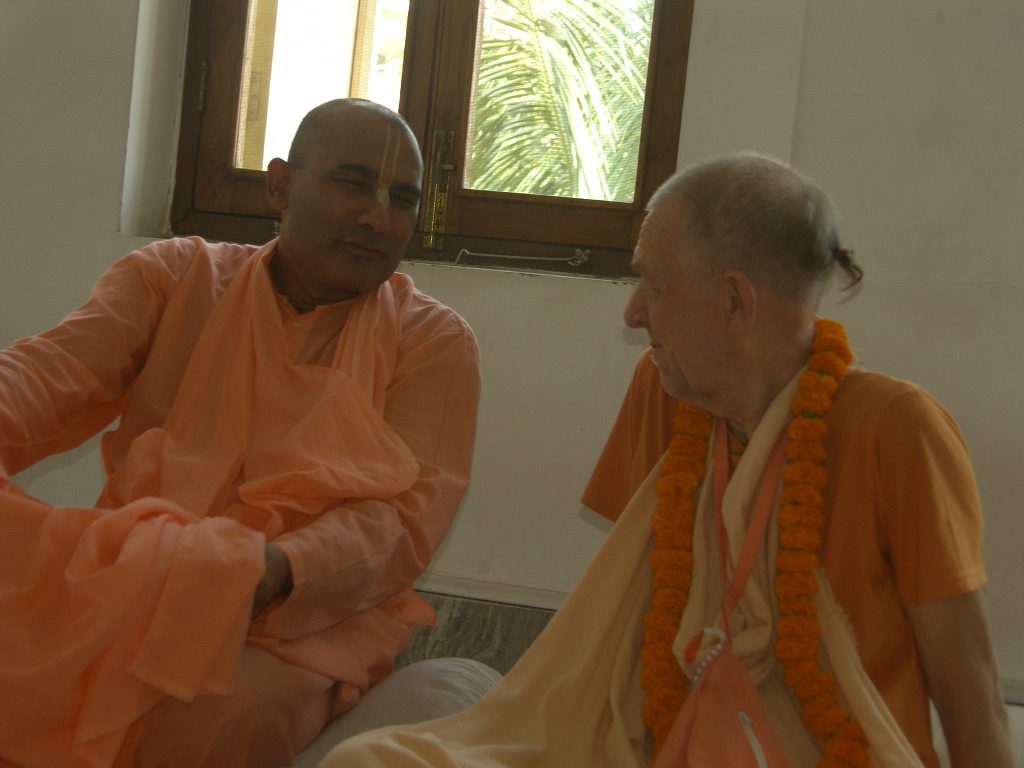 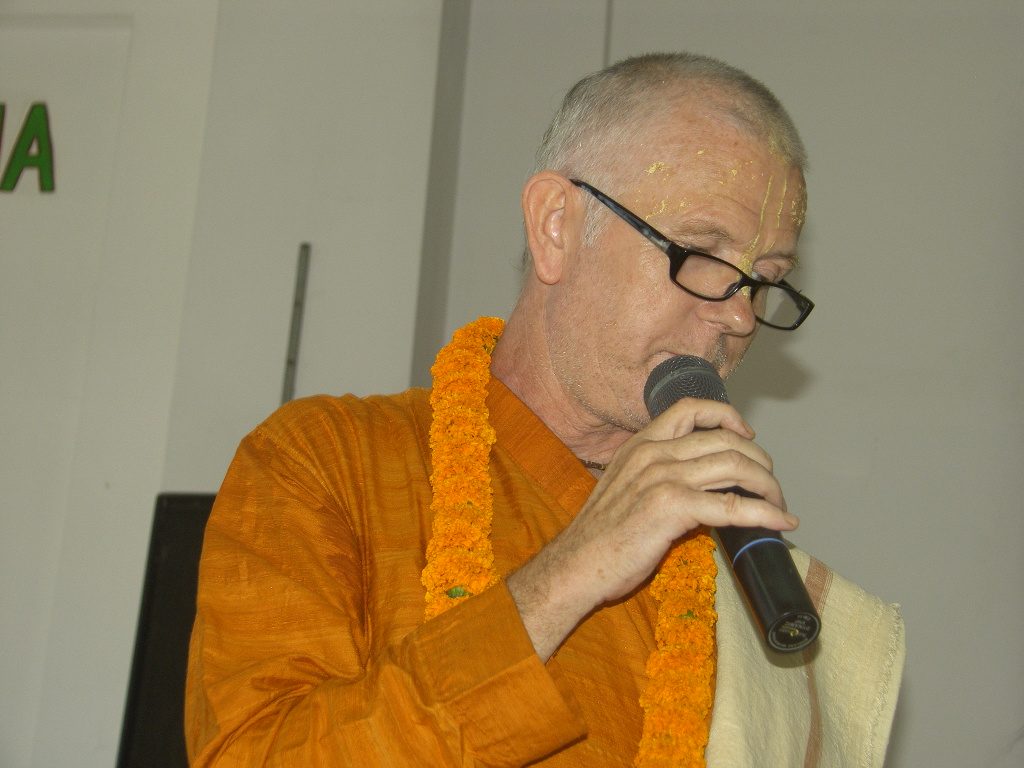 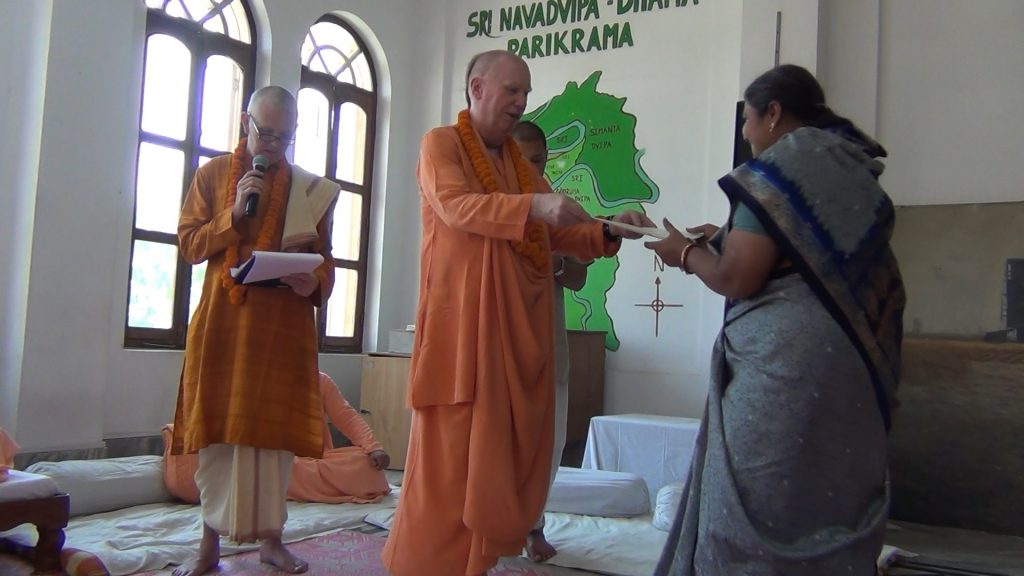 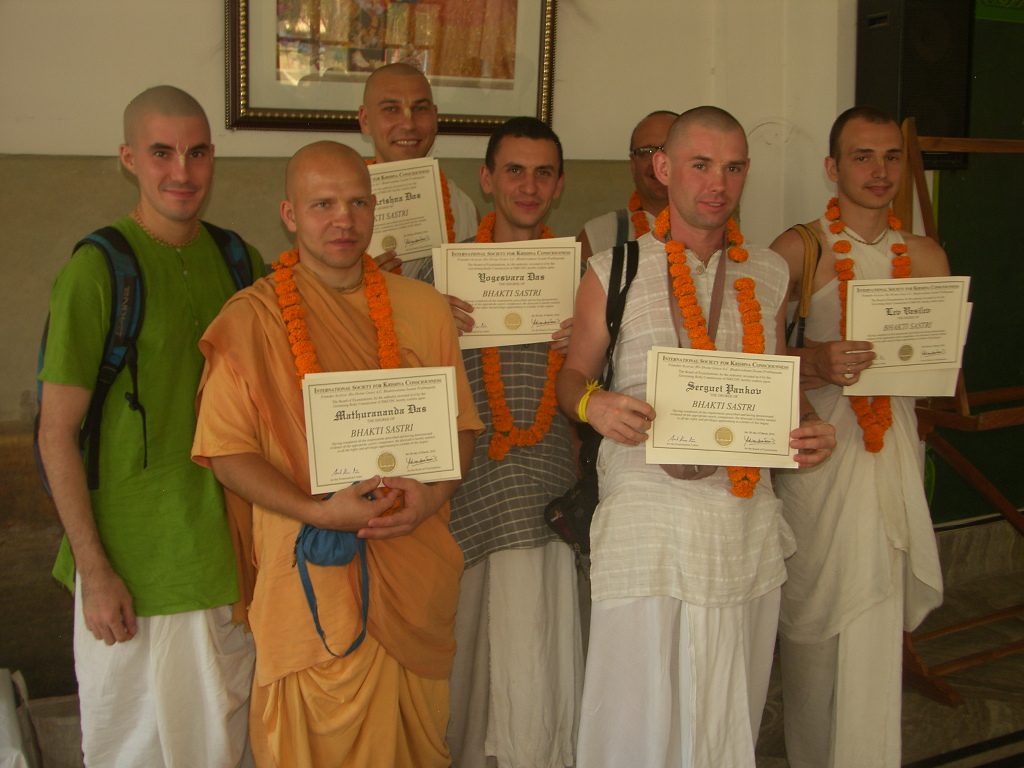 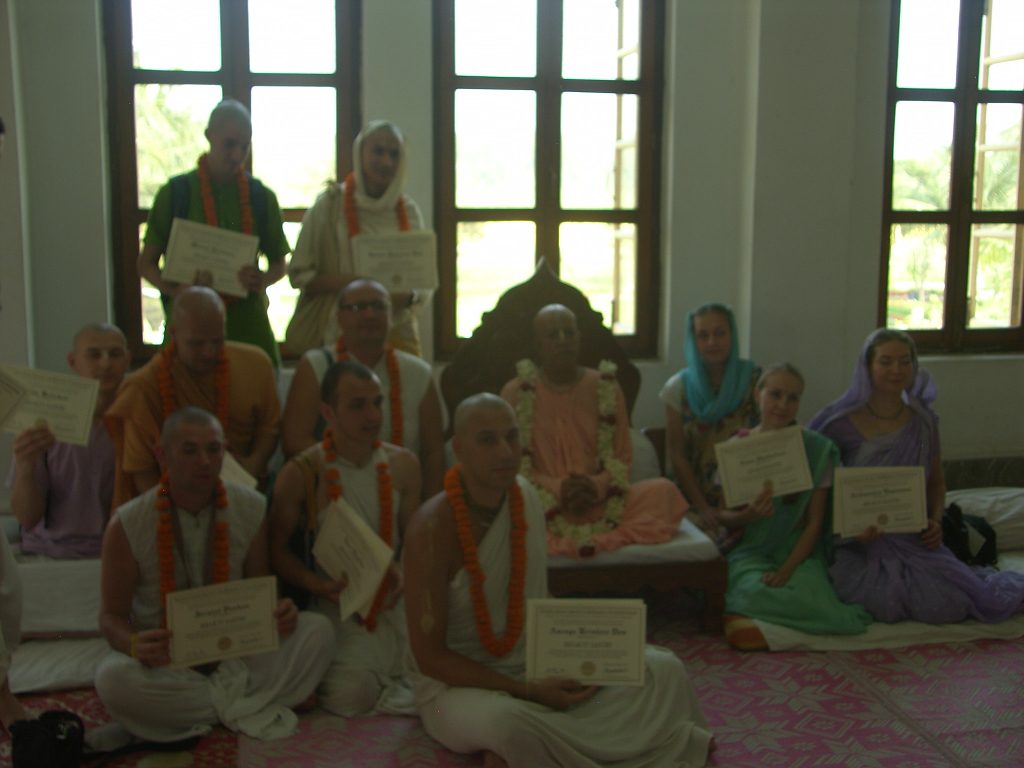 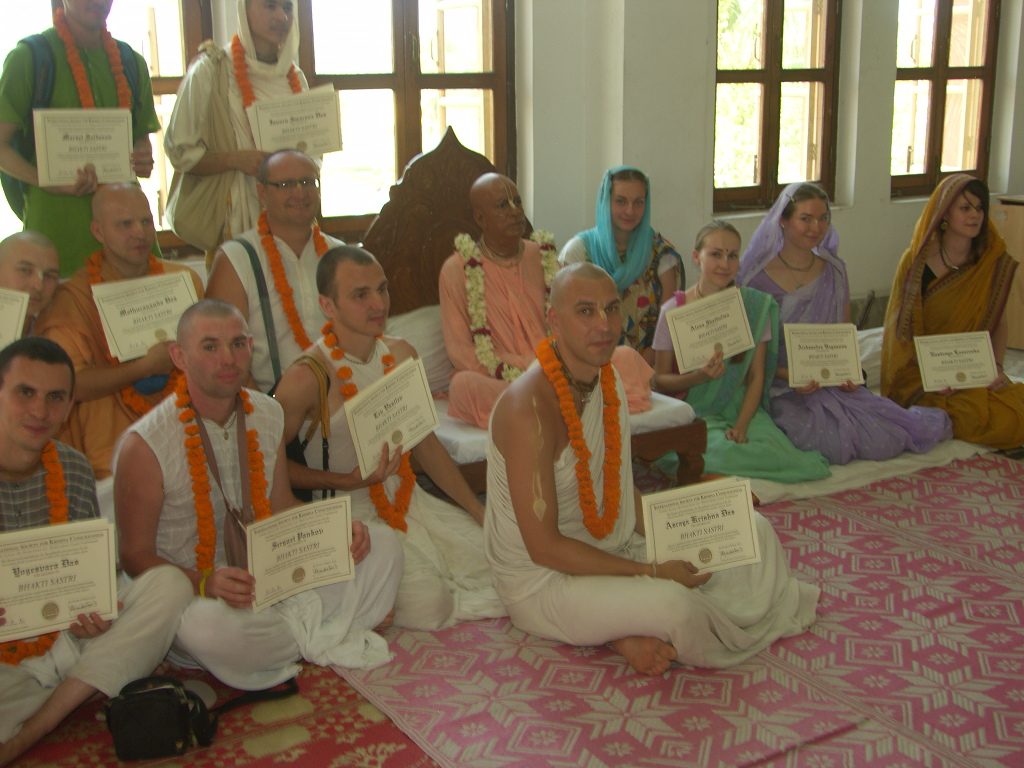 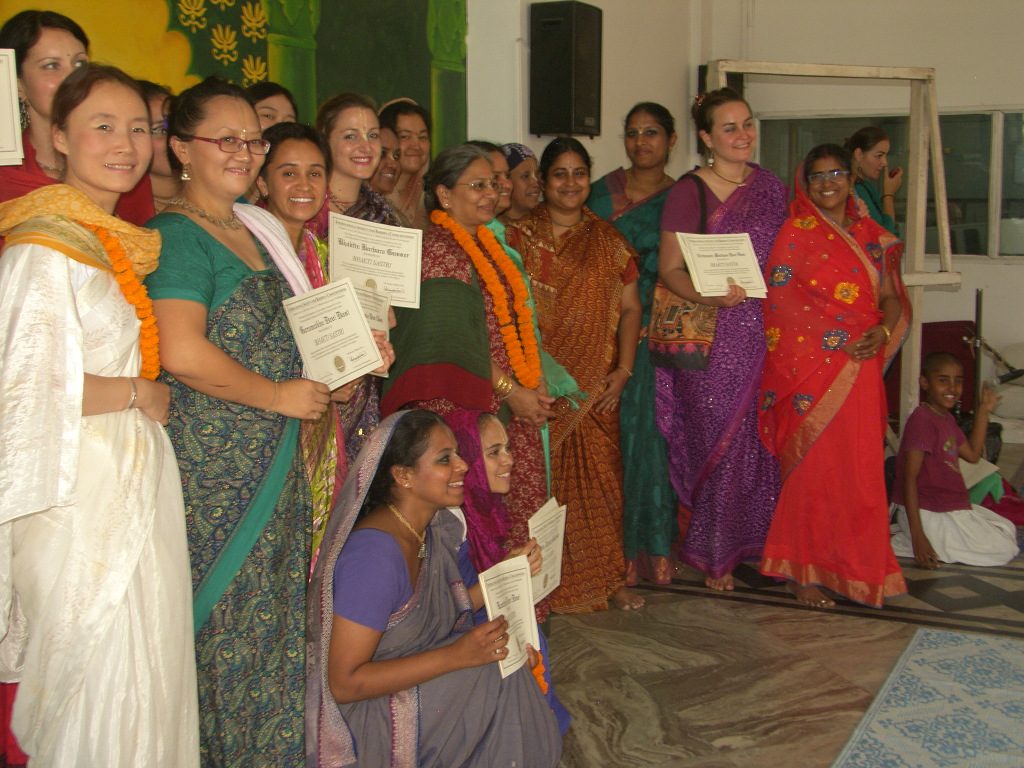 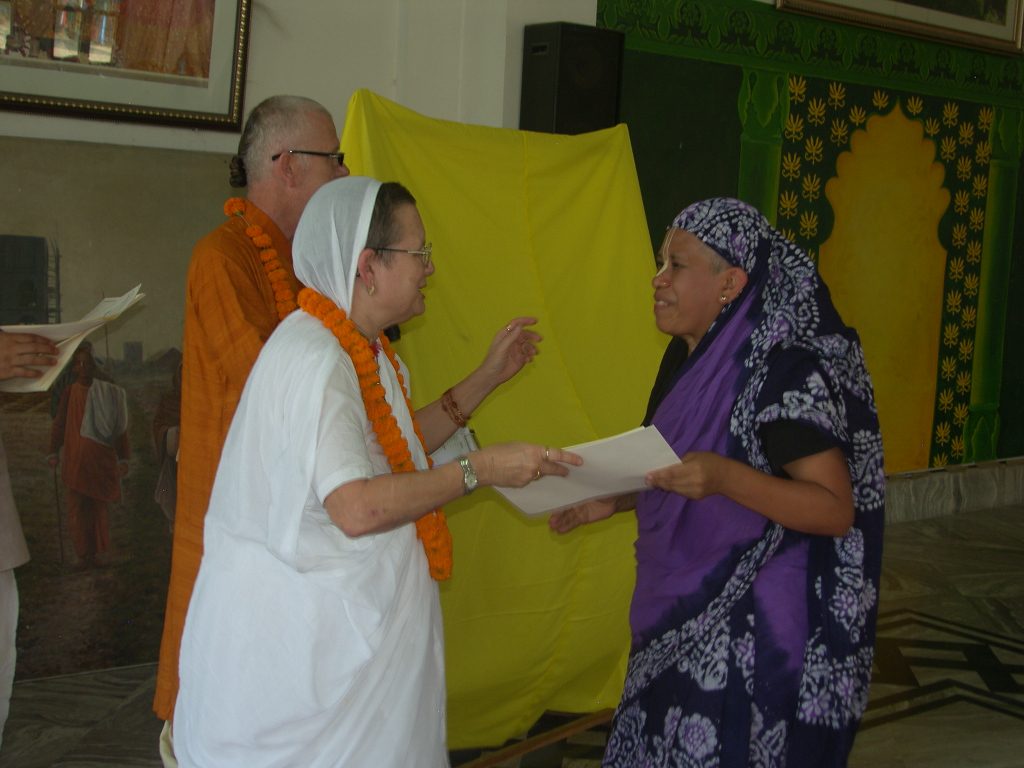 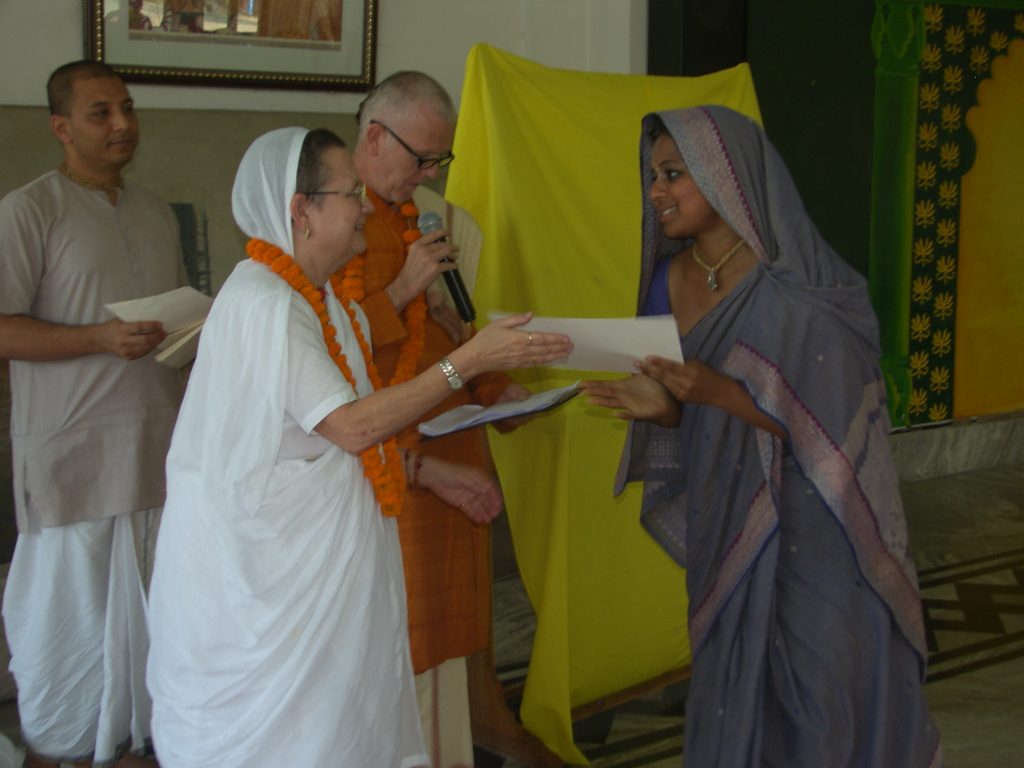 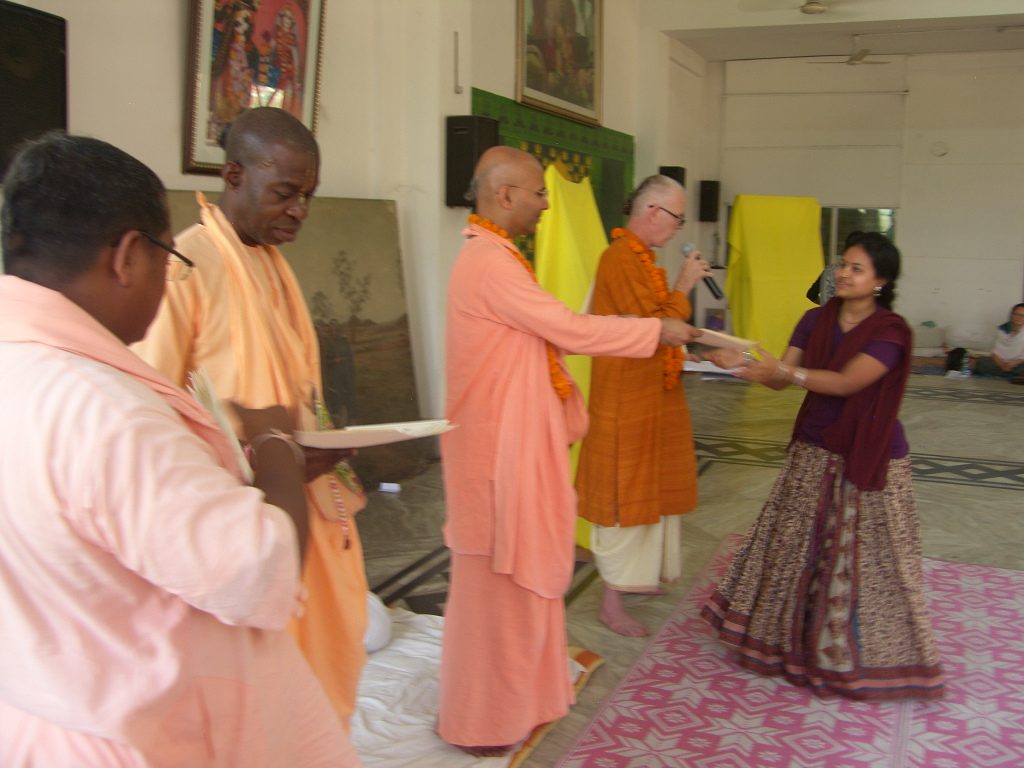 5th March 2016 was an important milestone in the history of Mayapur Institute. The institute celebrated its 15th graduation ceremony at the Pancatatva extension hall.

The Director, Padmanayana das, informed that the Mayapur Institute started in the year 2000 with just 3 Bhakti Sastri students and today after 15 years of operation, 157 students from 30 different countries are receiving graduation certificates. To date, 2500 students have graduated from Mayapur Institute. Definitely, this must be a great joy to Srila Prabhupada.

At the ceremony, certificates were awarded to all students in the following

groups: Bhakti shastri (men), Bhakti shastri  (ladies), Bhakti Shastri (Russian language), part-time Bhakti Shastri for Resident devotees, Bhakti Shastri (Bengali) and Bhakti Vaibhava. From last 2 decades, we have been continuously endeavouring to  provide  a conducive environment that helps our students to deepen their understanding of  Krishna consciousness. Students get to understand the principles and practices of Krishna consciousness philosophy  from a wide range of perspectives by developing thoughtfulness and  introspection.

HH Bhakti Vighna Vinasa Narasimha Swami  recollected the introduction of systematic sastric study in ISKCON. Initially HH Satsvarupa dasa Goswami would set the exam, there were no classes,  exams were based on elementary philosophy and the students who passed were given the  Bhakti shastri degree certificates. Later a team of devotees from China Tour were called, who went through rigorous classes during the kartik month in Vrindavan under expert educators like HH Tamal Krishna Goswami Maharaj, Bhurijan Prabhu, Ravindra Swarup Prabhu and Satyanarayan Prabhu.  Over the years the Bhakti sastri program has been developed into a systematic study and training course. Education is  very  important. If we look at the countries in the world, every country in the world has a budget and in that budget a major portion  is for education. ISKCON should also have a budget for education.

Over the years Mayapur Institute has seen many students coming here, getting trained and rendering wonderful services  after returning to their respective places. Maharaj  wished that  every  student be engaged in  the wonderful service of Srila Prabhupada.  He  expressed that  after  getting  initiation, one does not become a pure devotee immediately, but it marks the beginning of the journey. Similarly,  this certificate is just a beginning and it does not mean you know everything. We should always be willing to learn more and understand more. If we keep that humble mood, then our study here will be a success.

HH Bhakti Chaitanya  Maharaj mentioned how he had studied Nectar of Devotion 4-5 times but when he attended HH Giriraj  Maharaj’s class, he realised he did not know anything. Maharaj also reiterated the point that the best way to learn is to teach.

[image: HHBBBSM]HH Bhakti Brihat Bhagavat Swami  explained how there is a difference between studying on electronic gadgets and studying holding the traditional book or granth in the hand. Maharaj also expressed that how teaching at Mayapur Institute has always nourished him.

HH Subhag  Maharaj expressed that it is responsibility of all members of ISKCON to scrutinizingly study Srila Prabhupada’s books and become Brahmanas by quality. Maharaj  appreciated  Mayapur Institute for creating so many brahmanas through its various courses.

HH Bhakti Rasamrita Swami mentioned how he has been witnessing Mayapur Institute from the stage of its inception and how it has grown to a flourishing educational institute that it is today, having a worldwide reputation. Definitely it is a matter of great joy for all of us. Srila Prabhupada must be extremely happy to see so many courses and programs going on and devotees in large numbers coming here every year to study.

HH Bhakti Dhira Damodar Maharaj mentioned that hearing realisations from senior devotees’ is always beneficial. Now, after returning to our respective places, we should try to practice what we have studied. We may speak very nice philosophy, but unless we practice what we speak, we are not going to make an impact. Study and practice goes together.

HG Laxmimoni Mataji explained that it is important to imbibe the teachings from these courses in our life in order to share it with others. Mataji, implored all the students to be the carriers of scriptures. She explained how many people got attracted to the ISKCON movement by the personality of Srila Prabhupada. It is actually the character and quality of the devotee that attracts people to Krishna consciousness. Mataji, then encouraged all students to take what they got in these courses and let it go deep in their life and become manifest into actions,  qualities,  behaviour and then become an instrument to inspire others in Krishna consciousness.

“It has been 12 years, I wanted to come to Mayapur and take up Bhakti Sastri course at MI. We were able to do it this time, taking off from our busy preaching and management services. I was thinking of doing this course online, but we gained immensely by doing this course staying here in Sri Mayapur Dham for 4 months. The association of many senior devotees and Sanyasis is very enlivening and nourishing. We get to ask questions, hear from them. We got deeper insights into the scriptures and we now realised many mistakes that we used to do in our preaching. Such systematic education is very essential.”  – Rupesvar Gaur Das, Temple President, Kathmandu, Nepal, Bhakti Sastri (Men)

This time when I did Bhakti Vaibhava Course from MI, I could experience it.

We get to speak to different experienced teachers, co-students, and share our understandings. It is very enlivening. I was thinking that I know many things, but as I went through the course, I realised I did not know anything.” – Ravigopal Das, Bhakti Vaibhava Student

“The Bhakti Sastri course is the best thing that happened to me in my spiritual life. Coming to Mayapur and studying in the association of devotees really transformed me. When teachers are more experienced, students are also more enthusiastic to study. It is the most powerful experience of my life. I am very grateful to the teachers and fellow students” – Bhakta Josh, Bhakti Sastri (Men)

“One of the great experience I had during my Bhakti Sastri course is association of so many wonderful devotees” – Bhaktin Barbara Gasser, Bhakti Sastri (Ladies)

Besides the inspiring words of above prominent speakers and students sharing their experiences, the occasion was also graced by a kirtan and drama by Bhakti sastri students. HG Atul Krsna Prabhu palyed the role of MC for the program. Padmanayana prabhu concluded the program by thanking all the dignitaries and students for attending and making the graduation ceremony a grand success.