Srivas Thakur appearance day will be celebrated tomorrow.( 21st March 2017). At Mayapur, there will be abhisheka to Srivas Thakur deity at 11 a.m. Watch it live at mayapur.tv.  Sri Srivasa Thakur is incarnation of Narada muni. He appeared in Shrihatta and lived there along with his 3 brothers Sripati, Srinidhi and Srirama. The four […] 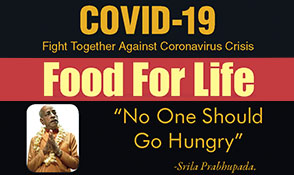