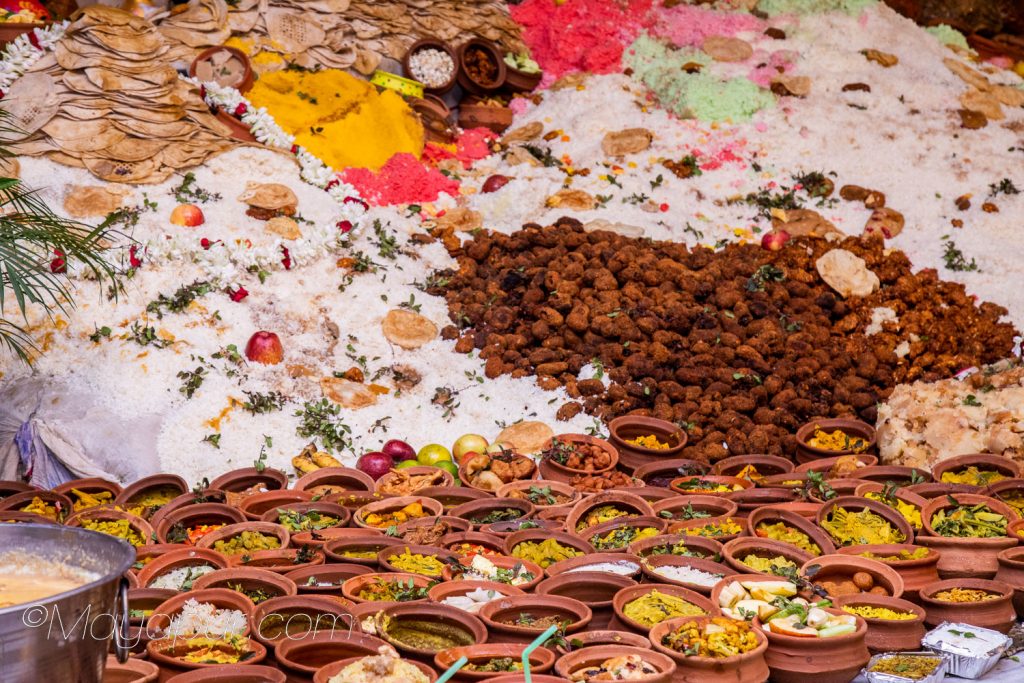 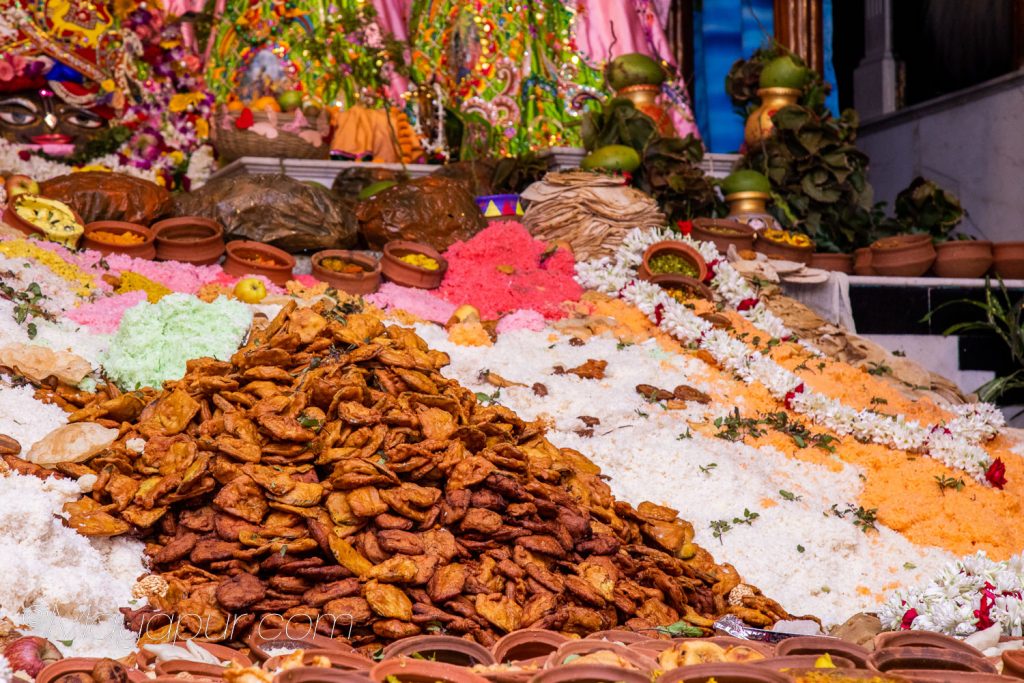 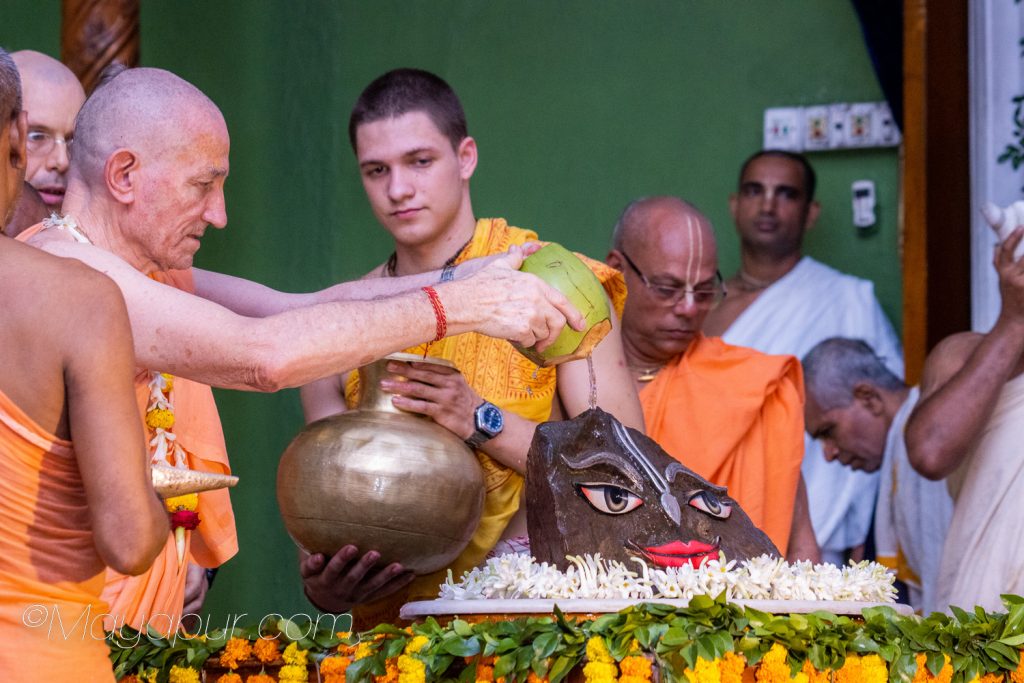 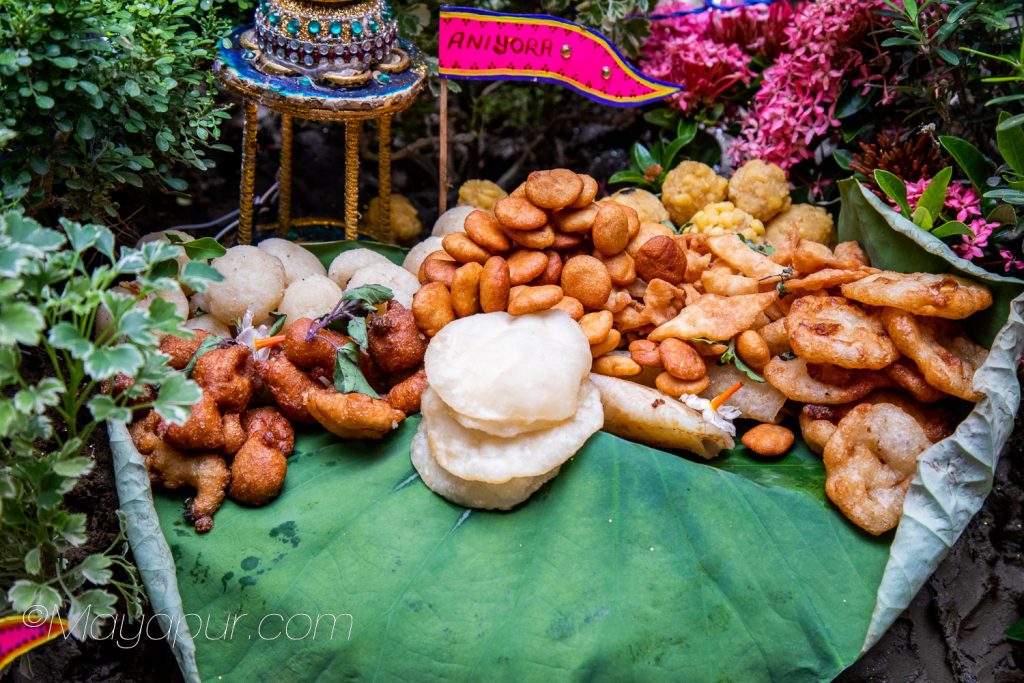 Yesterday we celebrated Govardhana Puja. It was an amazing celebration! It was feasting the whole day, and the distribution of Annukut Govardhana Prasadam took off at about 12:45 in the afternoon till about 4:30 pm. It was almost as if the entire village in and around Mayapur was fed as the queue kept growing more and more. Indeed, Giriraja was there Yesterday to feed and shelter His devotees and those willing to take His shelter!
So, as we all know from the pastime, Giriraja honored a tremendous quantity of offerings prepared by the Vrajavasis. This Annakut, or mountain of food, was in enormous proportions, but while Giriraja was honoring the offerings, he called out, “Aniyor! Aniyor! Give Me more! Give Me more!” Giriraja consumed more and more offerings until the Vrajavasis had nothing left in their homes to cook. Sri Balarama, being non-different from the Supreme Personality of Godhead, then understood that there was one thing missing from the offerings – Tulasi leaves. After receiving this final offering of Tulasi leaves, Giriraja was finally satisfied.
Following in the footsteps of the cowherd men of Vraja, the Mayapur devotees prepare a mountain of various delectable dishes to offer to Giriraja. All the major kitchens such as Gada Kitchen, Sulab Kitchen, and Gita Kitchen cook massive amounts of bhoga. Many of the community devotees also cook. The brahmanas cook in Radha Madhava’s deity kitchen, and the other community devotees cooked in their homes and brought the bhoga to the temple.
The devotees and the local youth begin building the Annakut hill at around 10 am in the morning. Devotees brought more and more bhoga as the day goes on, right up until the massive maha bhoga offering which took place at midday after the Abhishek of Giri Raja. The mountain of offerings measures approximately eighteen feet in length, eight feet in width, and about three and a half feet in height. Surrounding the mountain, there are hundreds and hundreds of clay pots filled with offerings cooked by the devotees.
Around 11am, Sri Giriraja Maharaja came down from the altar and the Maha Abhishek commenced. Unlike the harsh thunderbolts of King Indra, the abhisek offerings gently pour down the transcendental body of Giriraja. He is then finally showered with tumultuous rains of flowers. The Gurukula boys chant mantras in the background to invoke auspiciousness and a thundering kirtan takes place simultaneously. Mixed with the ululating of the assembled women, and the shouting of “Jai!” and “Haribol!”, the temple room somewhat resembles a fraction of what it might have been like five thousand years ago under the great mountain Giriraja – pure, ecstatic bliss.
After the Abhishek, Giriraja Mahaja graced the mountain hill of Bhoga which has been specially prepared for His pleasure, it was an experience missed with awe and reverence!
Just around the temple corner between the Pancha Tattva and Radha Madhava Hall, you will site a very beautiful ecstatic Govardhan forest that was specially crafted by the older and younger gopis of Mayapur Dham (community devotees). This very forest is filled with all auspiciousness. Is it the beautiful calves and cows, or the kirtan going on or the gopis and the gopals, or the beautiful Kadamba Vana that has been delicately made, or our very own mesmerizing Giriraja, smiling so brightly?
In the Bhakti-ratnakara, it states how Srila Sanatana Goswami would do Govardhana parikrama daily. As he got older, performing this vow became very difficult, and strenuous on his health; however, that did not stop him, despite the difficulties. Understanding his pain, the Lord came to Him in the form of a small cowherd boy and told Sanatana to give up his vow, as he was too old to continue. Sanatana Goswami didn’t see that as a good enough reason to give up his vow. The gopa boy then produced a Govardhana Sila, or a stone from Govardhana Mountain, with the marks of His lotus feet on it and told Sanatana, “If you circumambulate this Govardhana Sila, your vow of walking all the way around Govardhana hill every day will remain intact, for by circumambulating this, you circumambulate Govardhana Hill. You will thereby get the same result, keep your vow intact, and not compromise your religious principles.”
In Mayapur, following the same principle, devotees do parikrama around Giriraja who is present on Sri Sri Radha Madhava’s altar, and most do dandavat parikrama. Some even do dandavat parikrama around each altar – Radha Madhava, Panca-tattva, and Lord Nrsimhadeva. Just as Lord Krishna and the Vrajavasis did five thousand years ago, and Lord Caitanya did with His associates five hundred years ago, the devotees of the present day do Govardhana parikrama around Giriraja, which is the same as doing Govardhana parikrama in Sri Vrndavan Dham.
While the devotees are engaged in Govardhana parikrama in the evening, an ecstatic kirtan is held in the temple hall to conclude the festival.
vina bhavet kim hari-dasa-varya-
padasrayambhaktir atah srayami
yam eva saprema nijesayoh sri-
govardhano me disatam abhistam
“Without taking shelter of the feet of the hill that is the best of Lord Hari’s servants and full of love for the divine king and queen, how is it possible to attain pure devotional service? May Govardhana Hill fulfill my desire.”
– Govardhanastakam by Srila Visvanatha Cakravarti Thakura
Jai Sri Giriraja Maharaja ki jai!
Disappearance of Sri Narottama Das Thakur – 14th Oct
6 Days Left Until the Last Day of Kartik Mass!!! 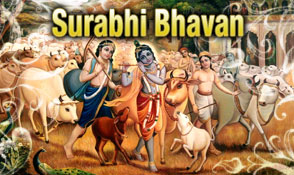